5MP Security Cameras: All You Need to Know 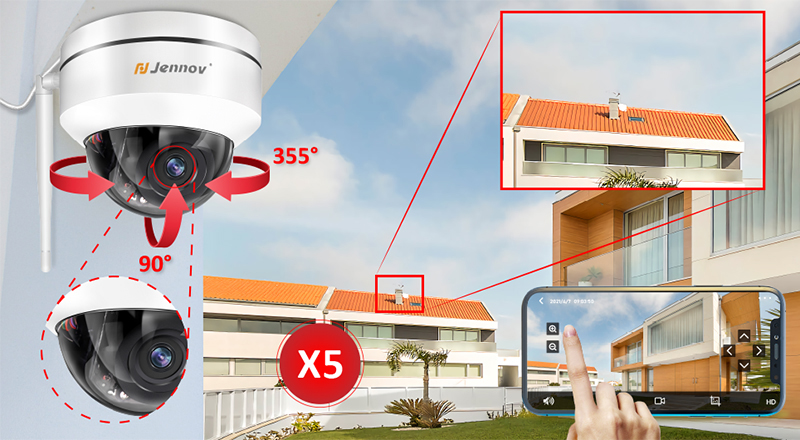 Should I buy a 5MP security camera?

4MP vs. 5MP vs. 1080p security camera, is there any visible difference in the image?

What’s the cost for a 5MP security camera system?

Every added pixel of the 5-megapixel cameras will improve the image clarity.

So the 5MP security camera is ideal to be used outdoors for clear recognition of human faces and plate number, or mounted in high positions for rich details of far-away objects.

Some of you may take the 5MP security camera as overkill.

I can’t agree when it comes to home security.

You know the human face and license plate recognition requires extremely high resolution and a good angle to catch them. And 5MP security cameras provide you the best possibility to get what you need.

If your house was unfortunately suffered from burglars, break-ins or thefts, isn’t it just a pity that the camera footage is useless? What’s the point of having a security camera if it tells you nothing?

Moreover, the 5MP security camera has already become a consumer type camera these days, just as many 4MP or 1080p cameras charge.

Note: Generally, you’ll need at least 1080p resolution to identify the plate number and people day and night, and the better resolution, the better clarity. Well, some higher megapixels security cameras, like 10MP IP cameras, are usually used on specialized occasions, a real overkill for home use.

Thanks to the super clear images, 5MP security cameras fear nothing about the distance challenge for their image quality.

Some of you could mistakenly install the security cameras in high positions in order to cover a larger monitoring area. But finally end up with a useless blurry view.

With 5MP security cameras, you are free to place it on high positions, like the second-floor level, to have it look down on the 150ft driveway or even the whole lack areas without any worry about the blurry resolution.

5MP Security Camera Can Zoom in for Details

Higher megapixels allow you to zoom in for rich details, even under digital zoom.

Digital zoom is criticized by some as a fake function which will result in blurry images.

But 5MP security cameras can be digitally zoomed in to some extent. In fact, if you digitally zoom in a 5MP image, you will find it still clearer than the 2MP (1080p) cameras (under 2X zooming).

Extra tip: If you want better zooming capability, it’s advised to get a 5MP security camera with optical zoom function, with which the images will still be perfectly clear without quality degraded and destroyed.

Let's get in touch

Call us or fill out the form below and we will contact you. We strive to respond to all inquiries within 24 hours on working days
+1 323-9021-978
support@jennov.com